In 2006 and early 2007, I used SenS III for many projects. On this page you’ll find some tracks made with SenS III. 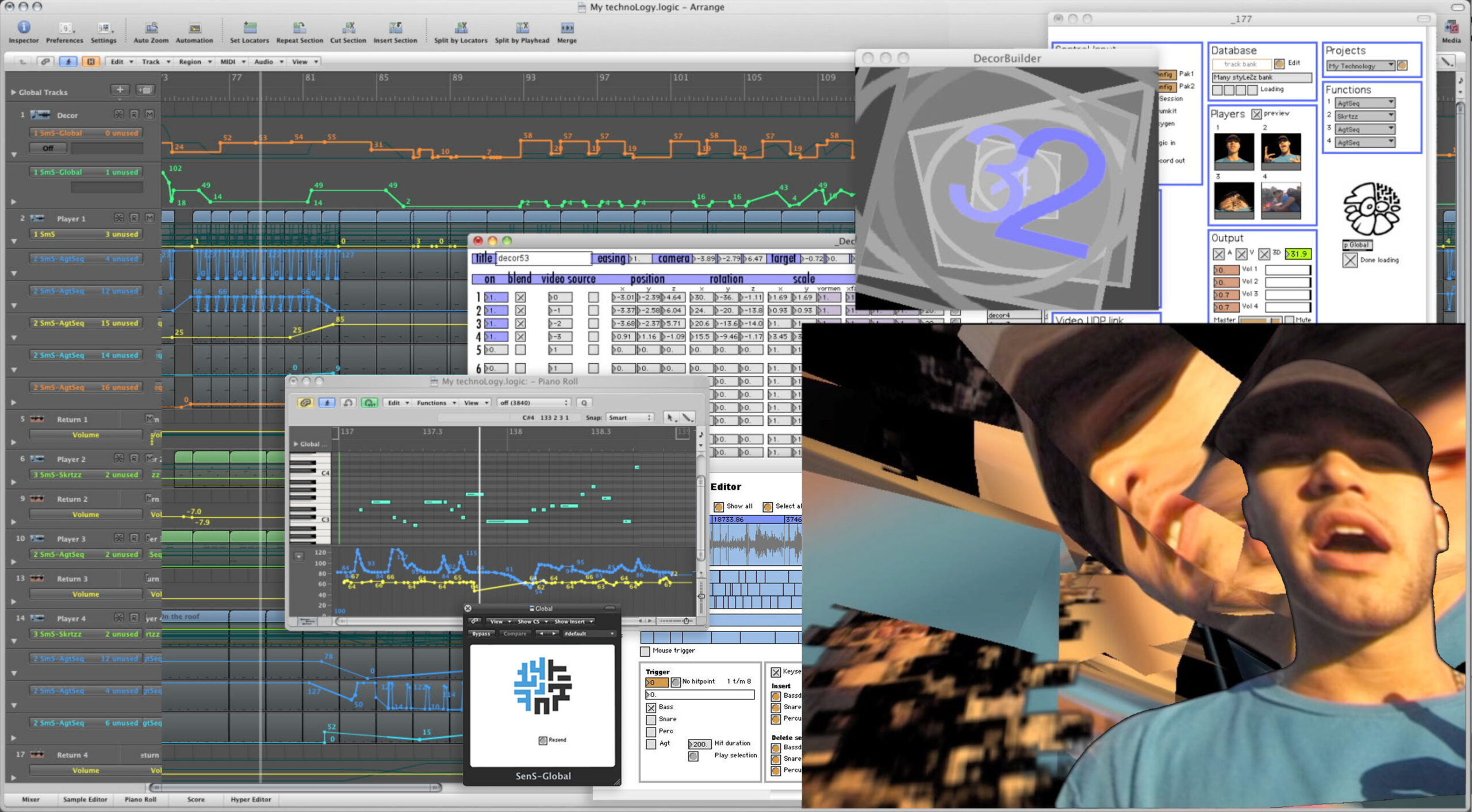 Due to hardware limitation in 2006, the complexity of visual effects was limited (vertex shaders with a low resolution). Therefore, I used pre-produced audio-visual effects in combination with real-time effects. Also, the amount of videos that could be used simultaneously was limited, four was the maximum.

In May 2007 I produced this track for the Eboman website 2.0. It is the last track produced with SenS III. After this track I switched to SenS IV. The video to the left shows how SenS III and Logic Pro were used.

SenS III was used for many performances with the SenSorSuit. This is a live performance in 2006 in Arnhem (NL) of ‘Headbanger’, a track from the Sample madnesS movie LLib LLik.

SenS III also supported live sampling. I did many live sampling shows, especially in 2008-2010. This is an early live sample show I did in Arnhem (NL), in 2006. I use a Coca Cola bottle to make a track and finish the track of with a live recorded sample of my voice. I used the SenSorSuit to control SenS III for this performance.

For Sanoma SenS III was used to mix visuals and live camera feeds during the Games in Concerts shows in 2006. In 2007, 2008 and 2009, invested a lot the 3D video mix and real time motion graphics software of SenS IV and SenSei, the successors of SenS III.

‘Onvermijdelijk (unavoidable)’ was a scene in the Verknipt show, made with SenS II. In 2006 I remixed this track with SenS III. I used pre-produced audio-visual effects  (see the video on the right) in combination with SenS II’s real-time effects for create abstract beats and visuals and to generate completely new visuals and sounds. All sounds and visuals are made with the voices/faces of the presenter, the politician and the scientist. Only a bassdrum and snaredrum were added to give the track extra punch.

I 2001, I made some video recordings with MC Many Styles, freestyle rapping into the camera in New York city. I used these recordings to make ‘My Technology’. This track consists of two parts: a glitch-hop track and a skrtZz track.

For this track I also used pre-produced audio-visual effects (see the video on the right) in combination with SenS II’s real-time effects. All sounds and visuals are made with the voice/face of Many Styles, Only a bassdrum and snaredrum were added to give the track extra punch.

Because I like the ending of this track so much, I added it here (right) as a separate video.

During that same trip to New York in 2001, I filmed a gardener in a parc, doing a freestyle rap into the camera. I used these recordings to make ‘On d job’.

For this track I also used pre-produced audio-visual effects (see the video on the right) in combination with SenS II’s real-time effects. All sounds and visuals are made with the voice/face of the gardener, Only a bassdrum and snaredrum were added to give the track extra punch.

For the Dutch Rare Grooves compilation, I made a remix of On the Job. I like this track, especially the ending.

For a performance in Milan, Italy, in 2006, I remixed the ‘Bush vs Wilders‘ scene of the Verknipt show. Audio-visual samples of Berlusconi and Prodi are time-stretched live with SenS III to turn the syllables in their speech into harmonic landscapes with accompanying 3D graphics.