Verknipt is a theater show I produced in 2005 with Huis a/d Werf productions. It was performed by Glen Faria, Daniela Bernoulli and me. Glen and I used a SenSorSuit connected to SenS II. SenS (now called EboSuite) is the audio-visual instrument I am working on with EboStudio.

The Verknipt show consists of nine scenes. Further down this page you can watch three recordings of each scene at different locations. We did 14 shows in 8 theaters and 4 media/music  festivals in the Netherlands.

Verknipt is the follow up of the Gedoe en Gedaan project. For this project I did many experiments, but didn’t manage to combine them into a coherent performance. For Verknipt I worked out the most successful concepts into an experimental performance for two SenSorSuits.

The Verknipt show opened with and energetic Intro scene. I skrtZzed a live video recording over the groove of GoTTo GoTTo with my SenSorSuit, while Glen danced around. This happy vibe get interrupted by the next sample I skrtZz. This is a scientist claiming that ‘Everything will go wrong in 2030’, but because his statement is skrtZzed, it is not clear what will go wrong. Glen gets annoyed and asks me to let him finish. At the end of the scene the beats stop and I let the scientist explain the rest. By 2030 the Netherlands will be flooded and disappear under water, because of global warming, he claims. Below three videos show this scene in three different performances on different locations.

The second scene deals with the effects of global warming and the weak response of politicians. I create an audio-visual track live with video samples of an interview of a politician on Dutch national television. He explains that it is hard for politicians to understand what is true and what not, so they choose to do nothing. But he agrees that global warming is a huge problem. Ironically, while counting down the excuses for not acting, he unintentionally ends lifting his middle finger to the camera.

I use SenS II to generate audio-visual rhythms and play with real-time audio-visual and timing effects live. Below three videos show this scene in three different performances.

This scene has a long intro, the videos below start where the beat improvisation begins.

The third scene is a live sample track. I create audio-visual beats live with random sample I make on stage with Glen and then skrtZz samples we make of the audience live over it. With real-time audio-visual effects I morph the beats into a rhythmic sync groove. Below three videos show this scene in three different performances.

In the forth scene Glen creates audio-visual beats with Swiep the dog and watches television. I control the video on TV and skrtZz the presenter talking about global warming. Glen gets irritated and presses buttons on my SenSorSuit to change the TV channel. We come across a brand new TV concept, the Sperm Show (an actual TV concept for Dutch television). Below three videos show this scene in three different performances.

The fifth scene is called ‘Now that’s entertainment!’. The scene starts with a presenter talking about the Sperm Show. While I turn this sample into an audio-visual groove, Glen raps about the shock value of today’s entertainment. After his first verse I turn different ‘entertainment’ videos into beats, grooves and skrtZzes and I skrtZz a man enthusiastically saying ‘Now that’s entertainment!’. On some occasions Glen joined me and we skrtZzed these samples together with our SenSorSuits. Below three videos show this scene in three different performances.

The sixth scene is called ‘DVJ 2020’. I do a short futuristic DVJ set. I envisioned all DJ’s to become DVJ’s and mix their tracks with advanced interfaces in 2020. But it is 2022 now and the Pioneer CDJ is still the most popular DJ tool and DVJ’s are still a rarity. Ah well, our time will come. Below three videos show this scene in three different performances.

In the seventh scene I sing my song ‘Shy’. A jazzy song about being shy. I sing this song to show the contrast between a performer with next level soft- and hardware creating hard digital beats and a performer using nothing but his voice with sensitive music. What has more impact? Below three videos show this scene in three different performances.

In the eighth scene Daniela Bernoulli joined Glen and me on stage to perform an audio-visual sTrTZz arrangement  ‘Bush-WiLders’. Glen and I stretch video samples of George W. Bush and Geert Wilders (Dutch populist politician) using their rhetoric. The stretched syllables become harmonic tones that form an orchestra of sounds and abstract visuals that embrace Daniela’s singing. Below three videos show this scene in three different performances.

In the ninth scene I create a rhythmic audio-visual composition with a sample from a Refugee who changes her western outfit in that of her native country. She is threatened to be send back. Politicians debating this issue are layered over this rhythm. Below three videos show this scene in three different performances.

Besides in theaters, we performed Verknipt at music/media festivals. Below three snippets from STRP festival, Festival De Beschaving and the Stubnitz.

For this show SenS II was created. SenS II was the successor of SenS I and was replaced by SenS III in 2006. Most concepts of SenS II are in essence the same as SenS I, but worked out much better and with 3D visual effects and mixing! Hardware was finally powerful enough to run the concepts of SenS on one computer.

Real-time audio-visual effects, 3D video mixing, advanced video triggering and time stretching, skrtZzing, composition assistance, all possible on one computer. This made it much easier to make compositions and perform them. After the Verknipt project I started SmadSteck (now EboStudio) for the further development of SenS.

SenS II didn’t use an external music sequencer to control the show. Instead it used a sequencer especially made for Verknipt. With this sequencer rhythm/melody patterns (loops of two bars) could be mixed live. Similar to Ableton Live’s Session View, tracks were created by alternating between loops to create new, original rhythms and melodies. In combination with the AGT this created many creative ways to create tracks live, improvised.

For Verknipt the skrtZz concept was much improved, so I could actually skrtZz with my SenSorSuit. The video on the right shows the first successful skrtZz test session. I love this concept very much and have used it for many shows since then (and will use it for many more in the future).

A cool concept that finally was not used in the show was the ‘visual painting concept’. The video on the right shows me using this concept. The way I am moving the ‘brush’ and changing its size with my SenSorSuit was used in the show, to scale/position videos live wih the SenSorSuit. Very intuitive.

This is een early scenario of the Verknipt show in Max.

For the Bush vs. Wilders scene I created a score for Glen and me. The video on the right shows us rehearsing this arrangement with Daniela.

The graphics on the right shows the score. 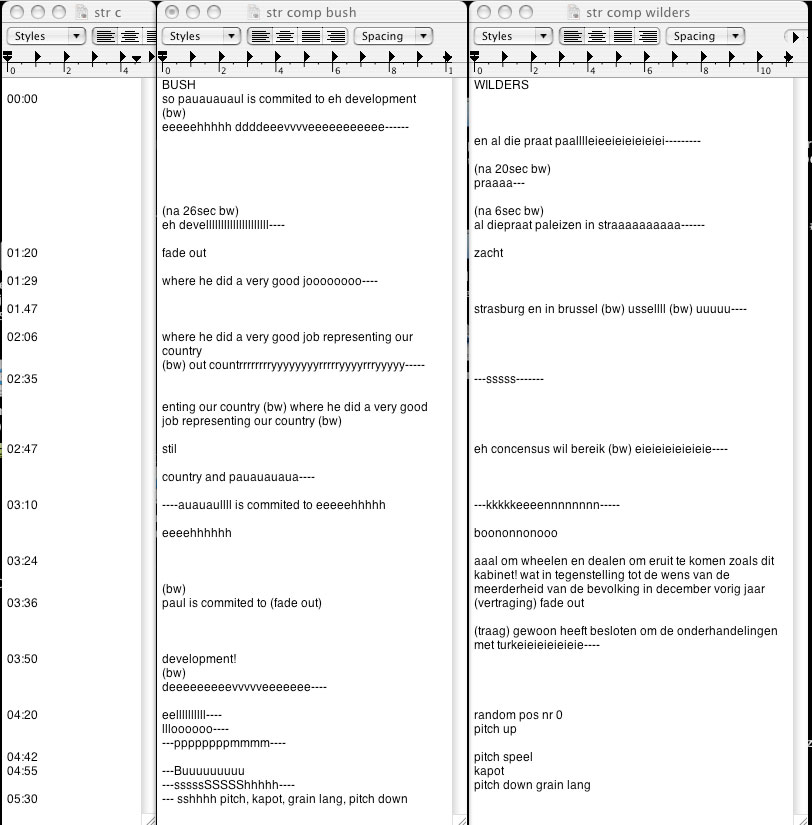