In 2016, Schauspielhaus Bochum (in Bochum, Germany) asked me to design the music and video projections for their theater production ‘Der Steppenwolf’. Der Steppenwolf is based upon the famous same-titled novel by Hermann Hesse and was directed by Paul Koek. For this project I used my audio-visual instrument SenSei and Augmented Stage. Using a 3D camera, the actors walk into the video projections and are part of this artistic, virtual world. They can touch the graphics, move around, shoot fire, become a wolf, and more.

We started working on the show in December 2016, the premiere was on 4 February 2017. We did 28 shows until June 2017 in one of the main halls of Schauspielhaus Bochum.

I joined the actors on stage and made the music and visuals live. I played ‘Pablo’, a mystical figure who introduces the main character (‘Harry Haller’) to the ‘Magic Theater’. The Magic Theatre is a place where he experiences the fantasies that exist in his mind.

For the famous ‘Magic Theater’ scene, I used Augmented Stage. This way, I was able to make this dream world come alive and let the actors interact with this virtual world and with each other (see below). The visuals were projected on a wooden ‘house’ with a big black paint stain. I used an extra, portable projector to project on other objects in the decor live. My equipment was with me on stage in a small desk on wheels. 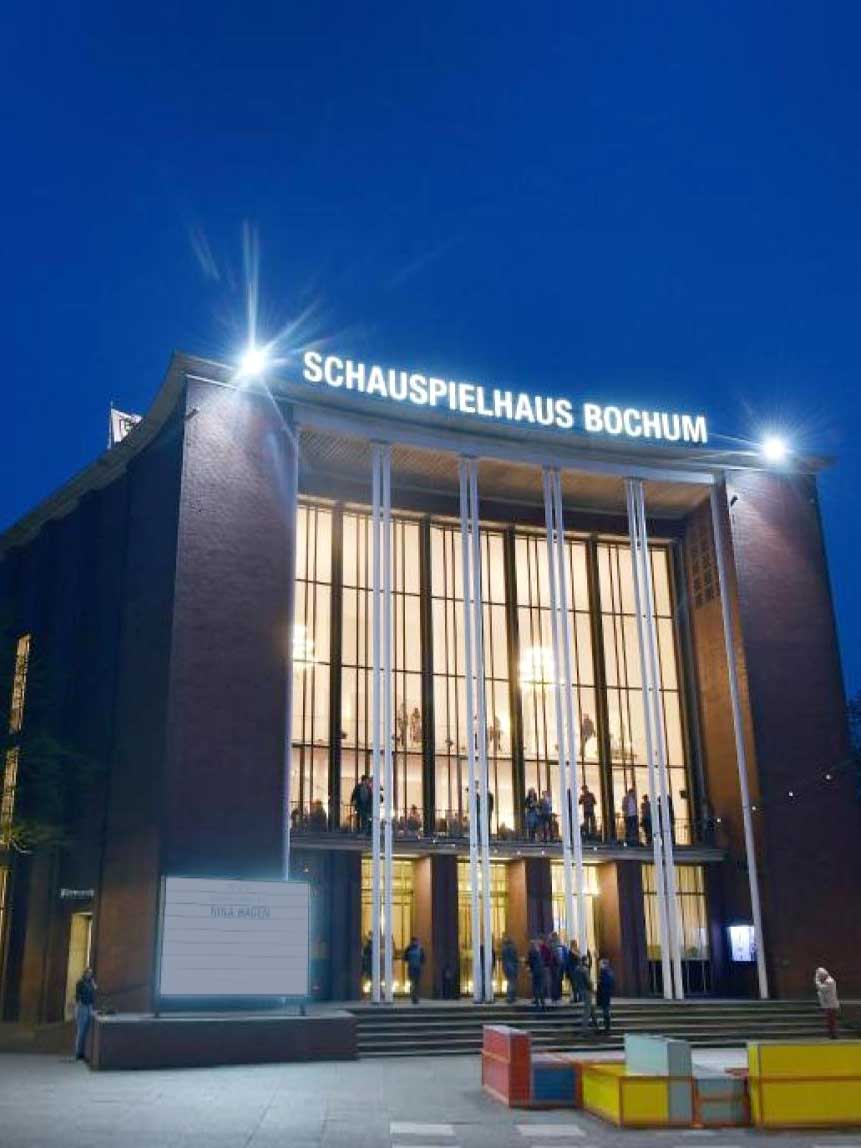 The videos below show the Magic Theater scene. The videos on the left show how the software (SenSei/Augmented Stage and Ableton Live) are used. Using a 3D camera, the actors walk into the video projections and touch the graphics, move graphics around, are recorded live, shoot fire, become a wolf and more. I am on the right side of the stage, monitoring the process and adjusting the timing of the projections if needed. The Magic Theater scene consists of five parts: the Mirror Room, the Hill, the Chessboard, the Wolf Trainer and finally, the War.

In the first part (’the Mirror Room’) the main character (Harry) enters the virtual world. The actor steps in front of the 3D camera and shows up in the mirrors. He is then recorded live, so he can walk around his virtual self and play with his image. He disorts himself and moves himself around, to become one with his dreams.

In the second part (’the Hill’), Harry climbs a hill and looks over memories of his childhood. Butterflies fly around him while he waves to the other characters on stage and joyfully reminisces about their past together.

In the third part (’the Chessboard’), Harry meets a strange character, who analyzes Harry and tells him about different aspects of his character. Harry is recorded five times during this conversation, making these different sides of Harry appear on the chessboard. Harry then collects these images of himself and embraces them.

Forth part: ’the Wolf Trainer’

In the forth part (’the Wolf Trainer’), Harry turns into a wolf. At first he enjoys being a wolf, but then he looses himself in this role. He gets too excited and thinks he can control the wolf inside him. His overconfidence and recklessness comes back to bite him, literally.

In the fifth part (’the War’), Harry becomes overexcited and destroys his dream world. He climbs the hill again to wildly shoot fire left and right, while his dreams go up in flames. The flames then turn into a colorful trip. While flying through these colors, Harry exits the Magic Theater.

To work on the visuals and music I moved part of my studio to Schauspielhaus Bochum in Germany. I stayed there for two months to work with the actors and Paul Koek. Paul has a very inspiring and fun way of working. He is very open to new ideas and likes to experiment constantly. Every day we tried out different concepts. When Paul worked with the actors on the dialogues and stage performance, I worked on the visuals and music for the next experiment. In the rehearsal space a draft of the decor was set-up, made of wood, paper and paperboard.

After six weeks we moved to the main hall of the theater to finalize the production there. Paul is very flexible and likes to constantly try out different variations of scenes, so we kept experimenting en polishing the performance until the premiere. The play debuted on 4 February 2017 with great success. We then played it 28 times in Bochum.